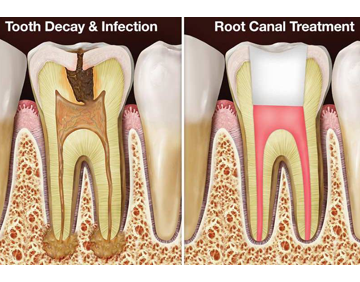 You need a root canal ! This is actually one of the most scariest phrases to hear , thereby preventing the patient for his dental visits . There is a wrong popular belief about the nerve being cut in this type of treatment which is not exactly the case ! I am commonly asked before a root canal 'Are you removing my tooth ?' or 'Can I go to work tomorrow ?' which definitely will be cleared more accurately in this article. WHAT DOES A ROOT CANAL TREATMENT MEAN? Root Canal Treatment As you all know, a tooth is divided into two parts , the crown and the root. The crown is the portion of the tooth clinically seen in the mouth and the root is the portion embedded in the bone covered with a layer of surrounding gum. The crown consists of three layers the enamel, the outermost layer, the middle layer also known as dentin, and the innermost layer known as the pulp (known as the nerve commonly), which is enclosed in a H shaped chamber. This pulp chamber is connected to a canal in the root where the pulp tissue is located just like the lead passes through the pencil to tip, hence it is named as a root canal . Whenever the pulp becomes diseased due to decay or trauma , that is when a root canal treatment procedure is advised . It is also known as endodontic treatment procedure and it commonly involves opening of the pulp chamber, removing of the infected pulp tissue and cleaning and shaping of the canal followed by an inert material to fill the canal ( So where are we cutting nerves and extracting teeth ?? ) This procedure can be performed by a general dentist or an endodontist (root canal specialist) . The functions of a pulp are mainly to provide blood supply and nerve supply therby making the tooth nonvital (or dead) once the procedure is over as the pulp tissue which is infected is completely removed ! SYMPTOMS FOR A ROOT CANAL TREATMENT: Pain on tapping the tooth or chewing on that side.. Severe tooth ache disturbing your sleep in the night or constant throbbing pain . Darkening of a tooth after a fall indicating a dead tooth needs a root canal Extreme temperature changes to hot and cold .(not seen in all cases ) Gum swelling around the tooth INDICATIONS FOR A ROOT CANAL TREATMENT: Root Canal Treatment Deep cavity which cannot be resored with a filling alone . Dead or non vital tooth due to trauma to the tooth . Smile designing cases which need a lot of tooth grinding to give the best aesthetic results do require intentional root canal therapy to avoid problems such as pulp sensitivity . CONTRAINDICATIONS OF A ROOT CANAL TREATMENT: Medically compromised patients such as patients suffering from heart disease or those who have had an artificial prosthesis replaced need a proper written consent along with medicines prescribed by their healthcare professional before root canal is started. Pregnant women in their first and third trimester are contraindicated for root canal therapy .It can be performed in the second trimeater and under the observation of the gynaecologist along with special care to be taken while performing X rays. ADVANTAGES OF ROOT CANAL PROCEDURE: It helps in relieving the pain completely and is a permanent procedure once done . It is the best procedure to maintain the natural and functional integrity of the tooth as opposed to tooth extraction which would result in a replacement with an implant or a FPD which would infact turn out to be a more costly affair. Root canal therapy earlier involved multiple appointments , however with the advancing techniques and armamentarium , it can be completed in 1-2 sitiings again depending on the anatomy and degree of infection in the tooth. STEPS INVOLVED: The tooth needing root canal therapy is given anaethesia to make it numb. For complete isolation , a rubber dam is applied . As seen in 2nd picture , the decay (cavity) is cleaned and an access cavity s prepared so that the instruments reach the tip(end ) of the root . Root canal instruments known as files are used to clean and shape the tunnel along with disinfectants to irrigate the canal so as to remove the infection from the tooth . Once the cleaning is done , the canal is dried and filled with a universal next material known as gutta percha followed by an aesthetic filling and a crown . Incase the tooth is too tender or has a lot of active pus, it is covered with a temporary dressing and the patient is called for a second sitting to complete the procedure . COST OF ROOT CANAL TREATMENT IN INDIA: General dentist: 50-100 U.S. dollars. Endodontist: 100-200 U.S dollars.