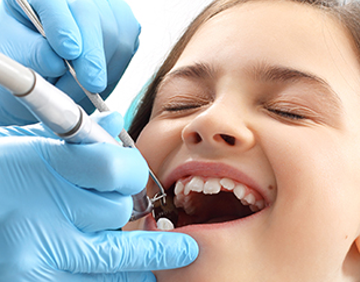 Children dentistry also known as pediatric dentistry , is the specilaised branch of dentistry which mainly involves around oral care of a child right from birth to adolescence. A dentist dealing with children is known as a pedodontist. Paediatric dentists not only take care of oral health but also promote the preventive measures taken to reduce cavities. WHAT IS THE CORRECT AGE TO START ORAL CARE? Oral care actually starts for an infant even before the first milk tooth comes out. As they say , baby teeth remain in a childs mouth till the time they are no longer babies, so appropriate care needs to be taken to achieve perfect function of teeth thereby helping in nutrition for the child. I would be stressing on various habits in children and need to break these habits so as not to cause any kind of disalignment for erupting permanent teeth. THUMB AND FINGER SUCKING: When a baby is born the first reflex he/she has is the sucking reflex which enables them to breastfeed. It also acts as a pacifier helping them to soothe give it a psychological advantage. The thumb and the fingers being easily accessible to the mouth , are used for playing as a toy and sucking thereby giving a self comforting, psychological pleasure. Ultrasound scans have shown that as early as 15 weeks post conception, images of the baby sucking the thumb are seen. Thumb sucking is completely natural and harmless till first five years of age and not related to the emotional well being of the child. However post this it can cause a lot of problems with respect to upper jaw growth making it more protruded, along with malaligned teeth which need future orthodontic treatment , cracked and chapped lips and finger nail infections. HOW TO BREAK THIS HABIT? Positive encouragement and reinforcement by the parents is needed to break the child out of this habit. Emotional support from the parent along with giving the child an extra cuddle, playing a game together with the child, would be helpful in the long run. Parents need to be aware of situations where the child is more prone to thumb sucking such as while watching television or riding in a car, and keep a check on the same. Applying a bitter liquid on the nail, putting a mitten,bandage or a glove on the fingers has helped in certain cases. You need to talk to a paediatrican if the habit still persists as in some cases it results in an overbite development . The dentist then needs to make a palatal bar with a crib which the child wears in the mouth to avoid thumb sucking . MOUTH BREATHING: Mouth breathing is also known as open mouth breathing , wherein the person breathes through the mouth instead of the nose. Healthy humans breathe through their nose, mouth or even both at times. Mouthbreathing mainly is an involuntary, subconscious response to breathe through the mouth due to partial patency of the nasal passages thereby not allowing the child to breathe completely through the nose. The point to remember is that no child woud intentionally breathe through the mouth unless and until there is some anatomical disturbance. Children rarely complain about the mouth breathing habit. It is only timely intervention by a dentist depending on the external features of the patient along with internal dentition changes affected by the same. WHAT ARE THE SIGNS ? Open mouth during sleeping Sleep apnoea Bad breath(halitosis) Gum swelling or thick fibrous gummy tissue Protruded front teeth Long and narrow face of the child along with dark circles under the eyes SIDE-EFFECTS OF MOUTH BREATHING : Children above 5-6 years of age having the habit of mouth breathing suffer from permanent dental alignment problems which if not corrected timely can also cause abnormally elongated jaw growth. These children are also more prone to ENT infections like cough, cold and sinus issues. TREATMENT: Consultation with ENT specialist is the first and foremost thing needed to treat partially patent nasal airways to avoid any further damage. As far as the dental alignment is concerned, consultation with the orthodontist is needed to correct the alignment issues. Some children with a narrow arch as a consequence of mouth breathing, need palatal expansion plates to widen the arch thereby providing better alignment and dental occlusion. However in growing teens, dental along with skeletal (dentofacial orthopedics) is needed so as to correct the elongated jawbone growth and improve the overall aesthetics. These measures not only help the overall dental isssues but even the airway passages and breathing through the nose is successfully achieved in 60 percent of the cases.